Find this article at:
go.ncsu.edu/readext?632386
— Written By Rhea Hebert 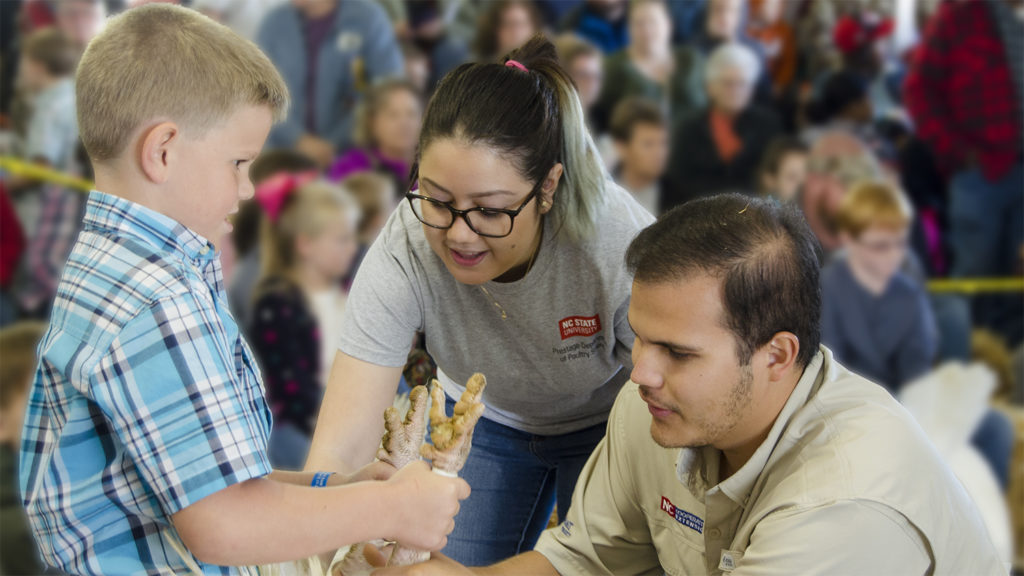 When you think about the North Carolina State Fair, what comes to mind? Is it turkeys? We hope it’s turkeys!

For many in Extension (and beyond) in the Prestage Department of Poultry Science, that’s exactly what the fair means. Turkeys are center stage at the Youth Market Turkey Show (YMTS), a youth event that gives participants the chance to raise and show a market turkey hen.

Livestock shows happen on the first full day of the fair (October 18 this year), reflecting one of the fair’s core goals: showcasing North Carolina agriculture. The YMTS is a proud part of that mission.

In fact, many YMTS participants show other animals, not just a turkey. Their broad participation reflects the diversity of animal agriculture in our state. For example, last year’s Reserve Grand Champion, Caroline Scarlett, also shows cows and goats. And this year, we had to stay flexible so that youth could make it to every livestock event in their busy schedule.

This year’s show was the first one run by Mary Fosnaught, 4-H and Youth Development Extension Associate for poultry. With the help of 28 volunteers, including undergraduates in the Poultry Science Club, Fosnaught kept two rings and over 200 participants on track!

Gathered into horseshoe-shaped rings, participants waited patiently with their class as a judge examined each turkey.

Jesse Grimes and Karlinton Flores moved around each ring, greeting participants and handling their turkey hen. 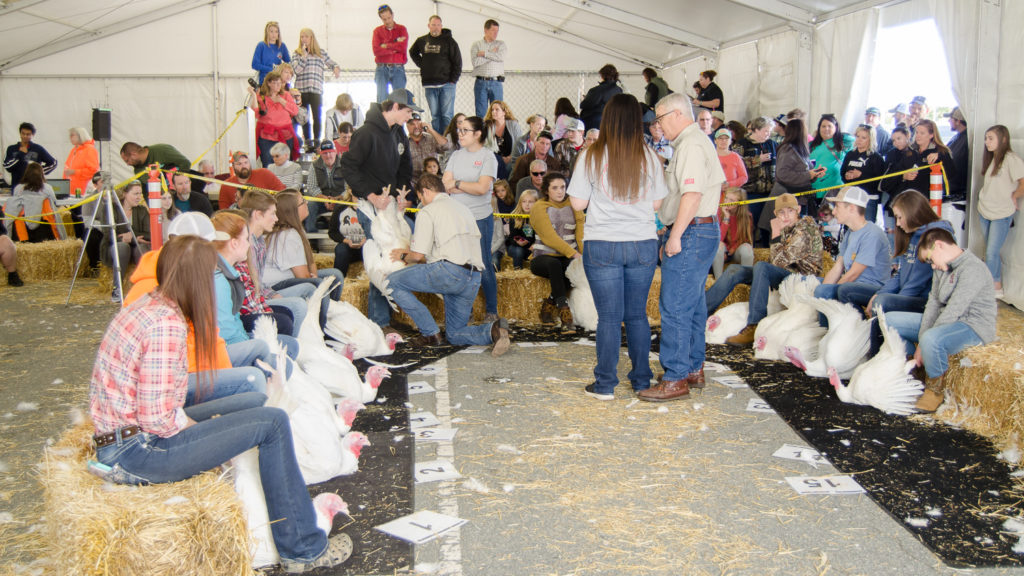 A judging ring at the YMTS.

Since these hens were bound for market, the judges were looking for how much meat the hen had overall and on her breast and legs in particular. They made sure the hen was healthy from head to toe and wasn’t injured.

Once the turkey judge moved on, another volunteer stepped in to ask the participant about raising their turkey. Questions were more or less difficult based on the class. Little Gobblers, for example, who are 5-8 years old, got more basic questions. Junior and Senior class participants were expected to go into a bit more depth with their questioner.

For each class, the judging team ranked the hens and participants, and awarded ribbons. The top of each class stayed for a second round of all the first-place winners to determine the Grand Champion and Reserve Grand Champion hens. 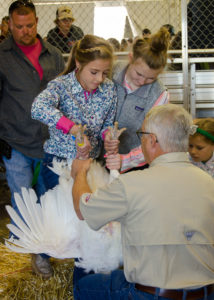 A participant gets a helping hand with her hen.

Every year, we’re reminded how important family is to this event – the event tent is filled with supporters, whether relatives or extended ‘family’ like Extension Agents, ag teachers and 4-H club leaders. One teacher moved between the two rings to support all “her kids.”

Little Gobblers and Juniors can get help from an adult while in the ring. That’s important, since market hens can weigh over 30lbs. Help came in many forms: parents, grandparents, siblings and many others were lending a hand in every class. When they weren’t helping in the ring, supporters were taking photos, bringing snacks and offering encouragement.

In many cases siblings who had already shown their own turkey stayed for the entire show to root for younger or older brothers and sisters.

In the crowd, relatives cheered on participants with enthusiasm – some were first-timers and some had been coming to the show for more than a decade with their child(ren).

One Senior participant was relaxed and excited in equal measure. He was an old hand at the show: at 18, this was his thirteenth – and final – YMTS. That’s a lot of experience and a lot of family support! (It paid off, too. He won first in his class.)

The N.C. State Fair hosts an Auction of Champions each year for livestock winners. The proceeds from each animal sold are split between the participant and a livestock scholarship fund. 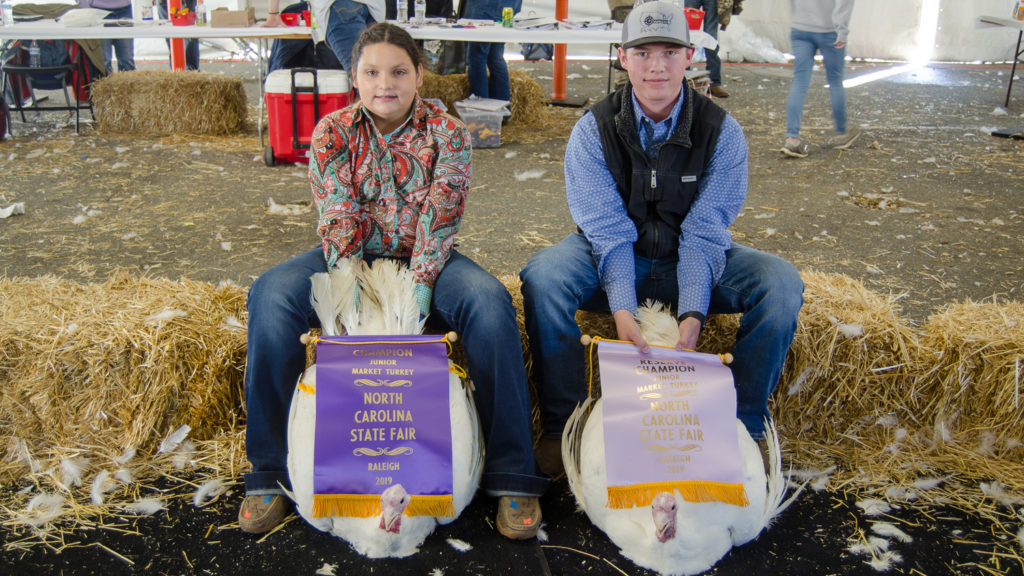 Winning is a thrill, but this year’s winners have even more reason to be proud: this was the first turkey show for both the Grand Champion and Reserve Grand Champion showers.

This year’s Grand Champion hen belonged to Hattie Jo Powell, 13, of Johnston County. Talley Farms had the winning bid for her hen at $7500. Hattie Jo said that she “didn’t know what to expect” at first, then asked friends who had participated before what do to. “I was a little scared at first but then it wasn’t that bad,” she added. Hattie Jo was “so excited” that her hen did so well and shared that she “enjoyed the experience [this year] and hope[s] to be back again next year.”

We look forward to seeing her in the ring again, along with 2020’s first-timers.

This year’s Reserve Grand Champion hen belonged to Riley Yates, 15, of Randolf County. McBride’s Concessions had the winning bid for his hen at $5500.

This event doesn’t just bring families together. Poultry faculty, staff and students work with industry sponsors and other units to make it all happen. Butterball provided the poults (baby turkeys), the NC State Feed Mill provided starter food and Zoetis sponsored lunch for volunteers. Poultry Extension staff and faculty were joined by other PDPS folks to keep everything running smoothly.

Inspired? Join the show: registration for next year’s YMTS opens in March 2020. Bookmark the YMTS page and look out for updates – the spots go fast!